Lifting the legs Knee on the pull-up bar (Hanging Knee Raises)  – we load the abdominal in full!

Lifting the Hanging Knee Raises can rightfully be called one of the most effective exercises for the press.

It is performed on a horizontal bar or pull-up bar, belongs to the advanced category and is suitable for people who have good sports training, which simple twists are not so interesting. The exercise has three variations, differing in difficulty level – this is the raising of the knees, lifting the legs above the parallel with the floor and, finally, raising the straight legs to the crossbar itself. 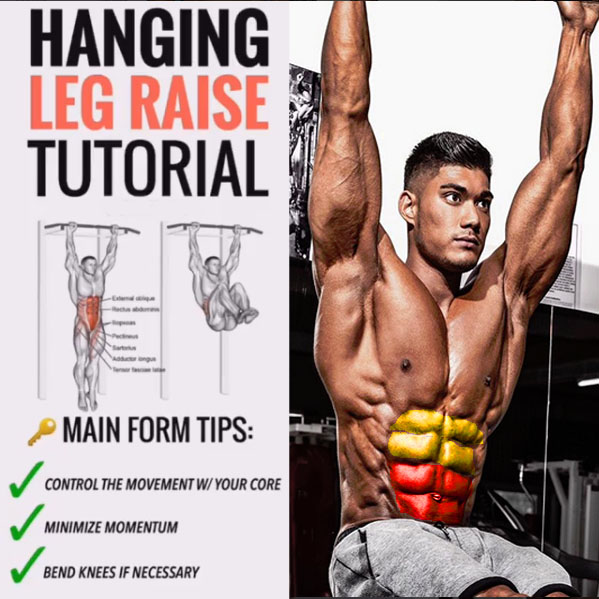 In Hanging Knee Raises perfectly works the entire press, maximally loading the lower part of the rectus abdominis muscle. As a rule, it is the lower part of the press that is most difficult to work out, and if the cubes are drawn quickly from above, then the beautiful relief from below is not a trivial task.

In addition to direct abdominal muscles, external and internal obliques are involved. If you make Hanging Knee Raises and adding twists of the body to the sides, that is, turning the knees to the right and left, then increase the load on these muscle groups. Also the muscles involved flexor muscles of the hip. They raise their legs from the lower position to 30-45 degrees. And after 45 degrees, the press is already actively turning on.

As already mentioned, the exercise has three degrees of difficulty: easier (lifting the legs bent at the knees), the classic (legs straight or slightly bent) and more difficult (straight legs go up to the pull-up bar).

Consider a universal technique for performing the movement, and which kind of variation to choose each athlete determines himself, depending on his level of physical fitness.

Strive to perform at least 15-20 repetitions in 3-4 approaches. At first it will be difficult, so do as many repeats as you can.