🔥 WEIGHTLIFTING BELTS when should you use them ? 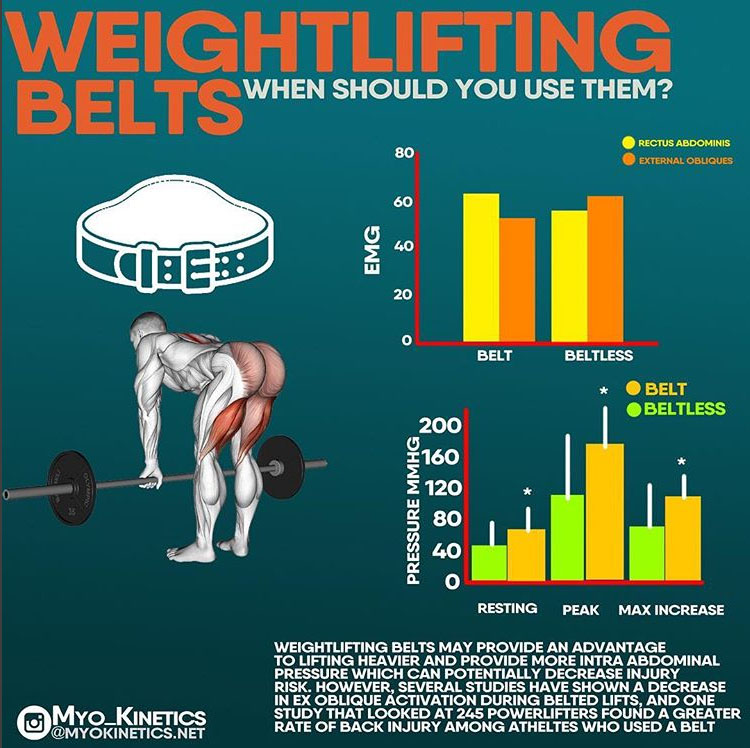 💥 Lifting belts are a popular accessory for people who train for strength/hypertrophy and Powerlifter/Olympic weight lifters. The belt is designed to increase Intra-abdominal pressure (IAP) this decreases the shear forces on the spine. The belt does help increase power and its possible to decrease injury risk with proper use.

✅ A study was done at the University of Auburn looking at the effects of weight lifting belts on (IAP) and muscle activation. The results found that wearing a lifting belt does decrease the forces on the spine through increasing (IAP). They also noted however that activation of core muscles (oblique’s) decreased, while rectus abdominis increased as well as that wearing a belt caused test subjects to emphasize hip extension more so than knee extension activating the hip extensors more.
⠀
💪 A second study looked at the effect of (IAP) in athletes wearing lifting belts while inhaling prior to the lift. The study showed that wearing a belt while inhaling reduced spine compression forces by 10%. However, a recent study looking at overuse injuries in Powerlifter found an interesting statistic. Powerlifters who wore lifting belts had a higher rate of injury than athletes without in (deadlight and squat). The researchers concluded “However, the use of supportive weight belts enhances the rate of lumbar spine injury”.

⠀
🚨 The first study recommends using belts only at a greater load as opposed to continues use through training 80%-1RM+. The third study recommends exercising without the belt as well due to the possibility of weakened core muscles due to lower activation as shown by a decrease in external obliques which we can see seem to be more important in increasing intra-abdominal pressure without equipment.
⠀
What are your thoughts on belts?

🔥How to: Reverse Grip Tricep Pushdown

January 24, 2019
You are going to send email to
Move Comment