In our article on the narrow-grip bench press, we will consider the following aspects:

Bench press narrow-grip – is an excellent multi-joint exercises that increases the volume and strength of the triceps. I believe that without this exercises it is impossible to achieve really serious hypertrophy of the muscles of the hands, since in it the athlete can work with fairly serious weights, which is the main growth factor for our muscles, of course, subject to the correct technique for performing movement. This exercises has undeniable benefits both for men who want to gain muscle mass, and for women who want to keep their muscles in good shape and just look good.

Bench Press Narrow-grip VS from the Classic Bench press

The correct approach in the bench press depends on: competent load distribution within the entire training process, the restoration of injured muscle fibers and the whole body.

The benefit of the exercises is obvious – the Bench press narrow-grip perfectly loads the medial head of the triceps, making it stronger and larger, due to which the visual volume of the arm is created, and triceps just creates about 60% of its total volume. In addition, in this exercises, part of the load falls on the front deltas and the inside of the pectoral muscles, the muscles of the press and upper back bear the static load.

Working bench press narrow-grip with decent weights, we also strengthen the ligaments of the elbow joints, which increases our record performance in the classic bench press. Having strong ligaments and tendons, it is easier for an athlete to control the barbell weight throughout the entire approach, since he does not spend energy on stabilizing the bar and keeping it in balance. In addition, strong triceps allows you to pass the last precious 20-30 cm of amplitude in the bench press with a wide grip, which, as practice shows, usually causes the greatest difficulty. Therefore, it will be useful for all athletes who are fond of powerlifting and bench press to pay special attention to this exercises.

On how correctly you follow the technique of doing the bench press with a narrow grip and “feel” the reduction in the necessary muscle groups, your whole result depends on whether it is aimed at developing strength indicators or gaining muscle mass.

Let’s look at the most common option in the gyms for the correct execution of this exercises on a horizontal bench. 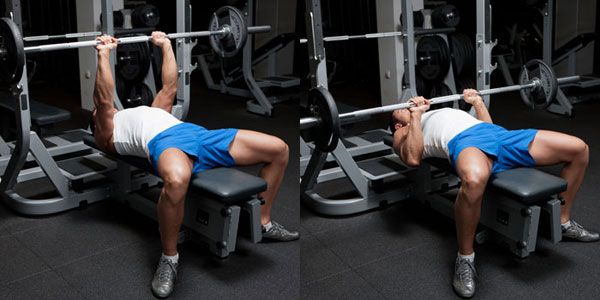 With the correct technique for doing the bench press narrow-grip, we disassembled but those who are just starting to train in the gym often make mistakes in the technique of performing the exercises. Let’s take a look at the most popular of them together.

In inexperienced athletes, the elbows tend to “roll apart” while lowering the bar, which can lead to serious injuries of the elbow joints. To avoid this, try to mentally concentrate on the position of the hands, as if trying to press them against the ribs.

Many athletes perform bench press workout with an open grip bar, citing the fact that they feel better the contraction of the pectoral muscles. The statement is very controversial, I think if there is a difference, then it is mainly at the level of self-hypnosis. Be that as it may, while working with an open grip, even an experienced athlete runs the risk of dropping the barbell on his chest at any time, and the outcome can be disastrous.

Buttocks should be firmly pressed to the bench throughout the approach. By tearing them off, you create unwanted compression on the intervertebral discs of the lumbar spine and lose concentration on movement. The situation is similar with the back of the head – it should also not be torn off the bench.

Weak triceps are the trouble of many girls who lead a sedentary lifestyle. If the muscles are not in good shape, and at the same time the girl is also overweight, the skin in these places becomes flabby, and her hands look ugly and not well-groomed. To visually minimize this effect, I advise girls to include a bench press narrow-grip in yourself training program. Work with small weights in a wide range of repetitions (from 12 and above), gradually increasing the load.

Don’t worry: you won’t pump up huge muscles for yourself, but your hands will quickly come into shape.