Biceps – is one of those muscle groups, the development of which athletes in bodybuilding pay the most attention. From experienced athletes you can often hear that they pump “peak” biceps – that is, they try to make the biceps more prominent. It should be immediately said that basically the shape of the biceps depends on your genetics, if you have long biceps since birth, you can hardly get a powerful “peak”, but with the help of special exercises you can make your arms more bulging and bulky. 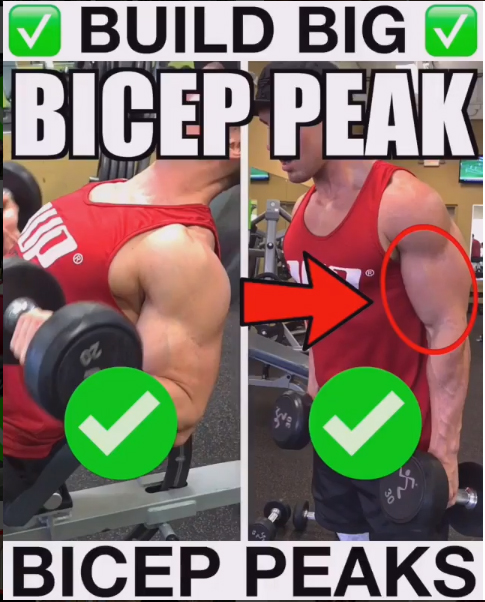 To increase the peak of the biceps, isolated exercises are best suited. Let’s look at each of them.

Exercises for the development of the peak of the biceps

Lifting dumbbells to the biceps sitting

Despite the apparent simplicity, the exercise has its own characteristics. The step-by-step execution technique is as follows.

Sit on a bench, taking in each hand a dumbbell and lowering them to the position of an outstretched arm. Keep your elbows as close to the body as possible. Expand your palms so that they look at each other at the bottom point (neutral grip). Look in front of you. This is your starting position.

While holding the upper hand in a fixed position, start lifting the dumbbell by using an isolated reduction of the biceps, turning the wrist away from yourself. As soon as the dumbbells reach the level of the shoulders, make additional supination (turning outwards) the brush. Hold in such a shortened position for 1-2 sec. Slowly and under control, start lowering the dumbbells down, turning your wrists and returning them back to the neutral grip position. Repeat the specified number of times.

Exercise refers to an isolated class and has as its goal the elaboration peak of the biceps muscle arm.

Standing Cable Double-Bicep Curl refers to the initial level of difficulty exercises. The step-by-step execution technique is as follows:

Approach the simulator crossover and set the desired weight on each side of the blocks. Adjust (if the simulator allows this) the height of the handles and make sure that they are located slightly above the shoulder level. Taking the handles of each block in your hands, take the middle position in the simulator. The position of the arms and legs is as follows: the arms are slightly bent and parallel to the floor, and the legs are located at the width of the shoulders. This is your starting position.

Inhale and exhale slowly and under control, by reduction the biceps arm muscle, bring your hands to your head (until the forearms touch the biceps). On breath, return the forearm to the starting position. Repeat the specified number of times.

We already wrote about the exercise Hammer Curls to read more in detail by clicking on the picture: